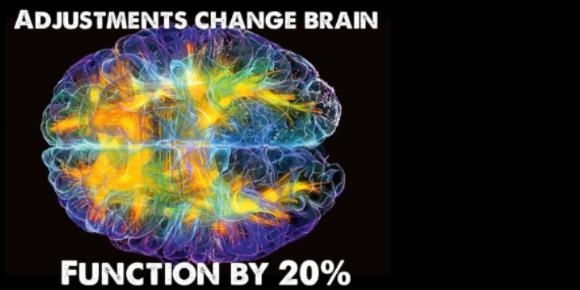 We do know that spinal function does affect brain function. There's now solid evidence that adjusting the spine changes brain function.
This is the fourth time that the effect of adjusting the spine has on the brain has been studied. This last time it was studied and confirmed by an independent medical researcher.
The latest study suggests that the changes that we do see in the brain when we adjust the spine do occur in the prefrontal cortex. That part of the brain is like the conductor in the brain.
An effect on the function of the prefrontal cortex could explain many previous research results, such as improvements in sensorimotor function relevant to falls-prevention; better joint-position sense in both the upper limb and the lower limb; improved muscle strength in lower limb muscles; better pelvic floor control; and better ability to carry out mental rotation of objects.
This is solid scientific evidence that adjusting the spine changes the way the prefrontal cortex of the brain is processing information from the arm. It demonstrates we change the way the brain works and shows that spinal function impacts brain function. One of the most interesting things about the changes we observed was that the prefrontal cortex is responsible for behavior, goal directed tasks, decision making, memory and attention, intelligence, processing of pain and emotional response to it, autonomic function, motor control, eye movements and spatial awareness.

Just one more reason to get your spine checked and adjusted!